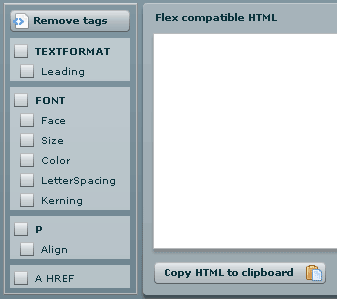 Ok, so after playing with the first version of the htmlText Editor, I realized there were some major improvements needed. The main thing I added is the ability to supress tags, so that you can cut down on unnecessary clutter in the htmlText. In doing this, I also gave the ability to “undo” those changes by unchecking the tags to supress and applying it again. There is a little help that gives some tips on how it’s used, nothing fancy since the app isn’t that complicated. If you use this or have feature requests, let me know. I’d like to hear some of the ways it’s being used. My guess is, it will be used mostly when giving a Text or TextArea htmlText or in specifying the htmlText in an XML file, like I’ve done. I hope it makes your work easier like it did for me!

htmlText Editor v2.0 (yeah, that was a quick dot release) 😉