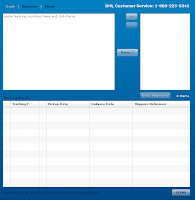 see the app in action

Here’s a little app I made in Flex to address a specific need. This app, called the DHL Service Tracker (for lack of a more creative name) tracks multiple shipments in one shot. In a shipping department that ships upwards of 30 shipments a day, there is a surprising amount of service failures for each batch of shipments. In order to keep DHL accountable and to assist in finding the shipments that should be refunded (thus saving the company x amount of dollars each year) there needed to be a way to track lots of shipments at once without having to type each individual tracking number. DHL shipping systems can create daily reports of what shipments have been sent, so the data is there it just needs to be processed. That’s where this app comes in.

Here’s a summary of the workflow:

1) User copies from a shipment report and pastes into the first text area, dates and all.

2) User clicks Parse > and the app pulls out all the potential DHL tracking numbers and populates the list on the right with them.

3) If there are less than the maximum allowed tracking numbers in the list and the parsing did it’s job correctly, the user clicks Track Shipments.

4) At this point, the little man behind the curtain makes a call to DHL to get the tracking results for each of the tracking numbers.

5) The results are formatted and shown in the datagrid across the bottom of the page. Green icons mean it was on-time, red means it was late. Check marks mean it arrived, dashes mean it’s still “in transit” and if it’s late and still in transit, you might shorten that to “lost”.

Feel free to play with it. It’s a work in progress. Future versions, if I feel there’s a need, will have printing ability and more! Feel free to send suggestions on how to make the app more usable. Try out the app here.